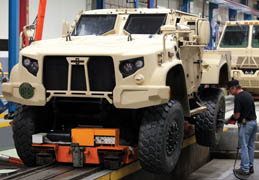 The Oshkosh Corporation no longer has to worry about a court challenge to its contract to build the replacement for the Humvee. Lockheed Martin has dropped its lawsuit over the contract for Oshkosh Defense to build JLTVs for the Army and Marines.

Oshkosh spokesman John Daggett says Lockheed’s decision came after a judge refused to issue a stop-work order, while the case was pending. He adds the company was not too concerned about Lockheed’s challenge, because the Department of Defense put all of the prototype vehicles through an extensive testing process.

Dagget says some preliminary work on vehicle production is already underway, but large-scale operation are not expected to start soon.

The initial contract is worth $6.7 billion.