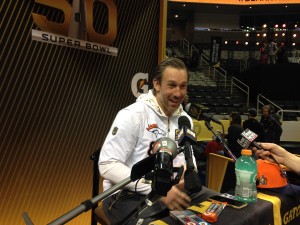 At the end of the season, Mike McCarthy said the Packers needed more help at the tight end position and more big targets in general.  After losing Jermichael Finley, the Packers never did sufficiently come up with a solution at tight end.

The Packers had a chance to lock up Daniels, who was released by Houston after failing a physical in March of 2014.  Daniels, who was coming off of sports-hernia surgery and a fractured fibula in 2013, paid a visit to the Packers.

Daniels met with Mike McCarthy, but never got together with general manager Ted Thompson and left Green Bay without an offer.

A week later, Daniels signed a one-year deal with Baltimore and went on to catch 56 passes in 17 games.

This season for Denver, Daniels has 50 catches in 18 games.  He shares the job with veteran Vernon Davis who was acquired via trade by the Broncos in early November.

The Packers could have made a run at Davis as well but decided against it.  So the Broncos have a pair of veterans in Daniels and Davis at tight end and they’re playing for a Super Bowl title.  The Packers refused to take the gamble on either and find themselves playing the role of spectator while the Broncos and Panthers play for Super Bowl 50.

AUDIO: Owen Daniels is glad he played at Wisconsin :20