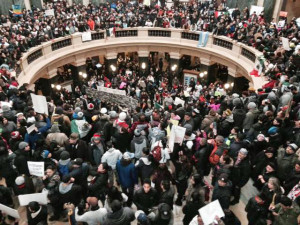 Madison police estimated the crowd at 20,000, as members of Wisconsin’s Latino community and their supporters rallied at the Capitol, to oppose a pair of Republican authored bills. “We will not stand by, while these anti-Latino, anti-immigrant bills move forward, and our critical contribution to the state economy is taken for granted,” said Christine Neumann Ortiz is with Voces de la Frontera.

One measure (AB 450), refered to as a “sanctuary cities” bill, would fine local governments for adopting policies barring police from asking about the immigration status of those charged with crimes. It has passed the state Assembly and is available for consideration in the Senate.

“If somebody is arrested for a crime, that’s when those cities would need to work with the federal government,” said state Representative John Spiros (R-Marshfield). “That’s what they’re supposed to be doing anyways. If they choose not to do so, then there’s a penalty that goes towards them. But this is not to penalize anybody who’s in this state legally or illegally. This is to protect us.”

The other bill, SB 533, would place restrictions on photo ID cards issued by local governments. That bill has already passed both chambers of the legislature and is ready for Governor Scott Walker’s signature. “We demand that AB 450 and SB 533 not be signed into state law, which would be a stain of disgrace on our state,” Neumann Ortiz said.

“The fear that’s being instilled is not coming from the Wisconsin legislature. It’s coming from activists who want to try to pursue a political agenda, and I think that’s unfortunate,” said Assembly Speaker Robin Vos (R-Rochester).