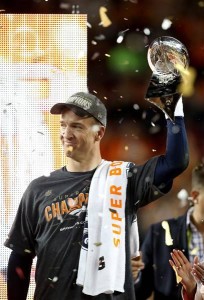 The Denver Bronco’s asked their defense to win the biggest game of the season and for veteran quarterback Peyton Manning to manage the game.  The result was a 24-10 victory.

Manning’s 56.6 passer rating was only slightly better than Cam Newton (55.4).  He completed just 13 of 23 for 141 yards, no touchdowns and one interception.  Hardly the type of numbers you would associate with a Super Bowl win.

But the Broncos simply asked Manning to not lose the game.  Don’t turn the ball over, like the Carolina Panthers did four times (three by Cam Newton).  Denver’s offense may have been boring to watch, but the Bronco’s coaching staff wasn’t worried about style points.  They were worried more about winning a Super Bowl.

To pull that off, the Broncos would have to put the game in the hands of their defense.

Defensive coordinator Wade Phillips has been coaching for 40 years, as an assistant, a head coach and now a coordinator.  He’s help build one of the league’s top defenses and they showed just how good they are by holding down the Panthers.

Going into the Super Bowl, the Panthers and NFL MVP Cam Newton had been making things look easy.  Last night, the Panthers were downright terrible.

Newton was sacked seven times, fumbled twice and threw a pick.  As out of synch that Newton looked, the rest of the Panthers offense looked even worse.

Phillips dialed up blitz after blitz and the Broncos defense suffocated the Panthers.

Von Miller was named the Most Valuable Player, the tenth time a defensive player won Super Bowl MVP honors.  He’s the second linebacker in the last three years to win the award.

It was Miller on this day, but it could have been any number of defenders that found a way to step up on the defensive side of the ball.  They’ve been doing it all season long.

Peyton Manning gets credit for earning his 200th win as a quarterback, surpassing Brett Favre at the top of the NFL victory list.  But at this stage of Manning’s career, he needed all the help he could get.  Wade Phillips, Von Miller and the rest of the Denver defense knew what they had to do and did it.

AUDIO: Wade Phillips on finally getting a SB ring :09

AUDIO: Wade Phillips on what it means to win a SB ring :07