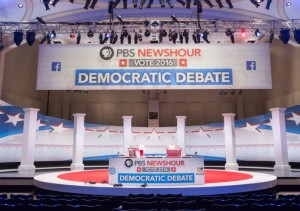 While the two candidates vying for the Democratic presidential nomination share many similar positions, both focused in on some of their key differences Thursday night during a debate hosted by the PBS News Hour on the UW-Milwaukee campus.

Democrats Hillary Clinton and Bernie Sanders hit each other on topics that included immigration reform, campaign finance, racial justice, and foreign policy. The two also clashed with each other over their support of President Barack Obama, and discussed the historical significance of either of them becoming his successor.

Backers of both candidates claimed victory following the debate. Sanders advisor Tad Devine argued that he “dominated the event, from the beginning to the end,” while U.S. Senator Tammy Baldwin (D-WI) described Clinton’s performance as “explaining how to get the job done.”

Clinton mentioned Wisconsin several times in her remarks, highlighting issues with racial disparity and crime in Milwaukee. Mayor Tom Barrett admitted some of those issues can be challenging, but they are ones he has been talking about for years. “I couldn’t be happier to have that conversation. It’s a challenge, it’s a problem, but it’s something we can face.”

Sanders made no mention of issues facing Wisconsin, although campaign manager Jeff Weaver attributed that to the candidate looking at every state as playing a big role. He said they believe there will be a “key battle” in Wisconsin when the April 5 primary rolls around.

Democratic Party of Wisconsin Chairwoman Martha Laning praised the performance of both candidates. “It was just very exciting to have two Democratic candidates who want to improve the lives of Americans right here in Wisconsin sharing that story.”

In a statement, Republican National Committee Chairman Reince Priebus said the Clinton fell short and Democrats now face an impossible choice between a “socialist” or a “serial flip-flopper.” Priebus said “instead of putting forth a new direction for the country that would restore prosperity and confront radical Islamic terror, the Democrat primary has devolved into a race to the extreme left. Only a Republican in the White House will provide the clear-eyed policies and strong leadership America needs.”

Both candidates head back out on the campaign trail, as they look ahead to the next key votes in South Carolina and Nevada.