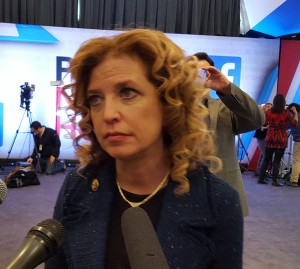 The chair of the Democratic National Committee expects Wisconsin to remain a battleground state in the presidential race, but it ultimately optimistic it will once again swing to their candidate.

DNC chair Debbie Wasserman Schultz says the decision to hold Thursday night’s debate in Milwaukee was a deliberate one, intended to show its importance in the 2016 race. “Wisconsin voters share our party’s priorities, and we want them to know we are not taking them for granted.”

The last time Wisconsin voted for the Republican presidential nominee was in 1984. Wasserman Schultz believes the state has firmly backed Democratic candidates since then because they want a president whose priorities focus on helping people reach the middle class.

AUDIO: Debbie Wasserman Schultz on why Democrats will win Wisconsin (:34)

Wisconsin voters will not vote on who they think the Democratic nominee should be until April 5, and Wasserman Schultz says it’s “hard to say” what role their voices will have on the selection process. “I’m focused on making sure we can manage the primary nominating contest, and prepare our party, so that when we have a nominee we can launch them to the White House.”

Republicans are also confident about their chances in November. Speaking on the UW-Milwaukee campus ahead of Thursday’s debate, Wisconsin Lt. Governor Rebecca Kleefisch says it doesn’t matter who the Democratic nominee will be, because “the Republican nominee is going to offer such a different vision that the American electorate will see a clear contrast.”

AUDIO: Lt. Governor Rebecca Kleefisch on the difference between nominees (:19)

Kleefisch said that she believes Americans will resoundingly back the candidate in November who has their interests at heart. “