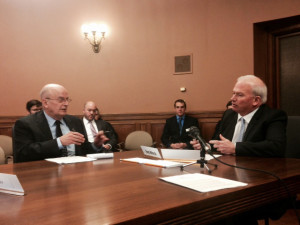 A bill to prohibit “double dipping” in elected office is advancing at the Capitol. State Senate Majority Leader Scott Fitzgerald (R-Juneau) wants to prohibit lawmakers from simultaneously serving as county executives. The measure received public hearings before Senate and Assembly committees on Wednesday.

The GOP leader acknowledged that he has Winnebago County Executive Mark Harris in mind. Harris, a Democrat, is running for a state Senate seat.

“The idea that his $100,000 job in Winnebago County is now going to be a part-time job for him, I think everybody in the legislature should be upset by that,” Fitzgerald said in the Senate hearing.

State Senator Bob Wirch (D-Kenosha) said the timing is suspicious. “In an election year, when a Democrat is running for state Senate, all the sudden we push through legislation, when we looked the other way when Ziegelbauer did it.” Manitowoc County Executive Bob Ziegelbauer served an overlapping term in the state Assembly, as a Democrat and an independent, for more than six years. As an independent, Ziegelbauer caucused with Assembly Republicans.

Fitzgerald said some lawmakers were concerned, during the period that Ziegelbauer held both offices.

“To me, the responsibilities associated with being somebody at the county level, who’s trying to deal with the scope of issues that we deal with, and that somehow that’s not going to conflict with public policy being in this Capitol, it’s just ridiculous,” Fitzgerald said. “It would happen every day of the of the week.”

Scot Ross with the liberal advocacy group One Wisconsin Now, said a search of the group’s media files failed to uncover “a word said from any current elected Republican, related to Bob Ziegelbauer serving as the county executive of Manitowoc County. Not one word.” Ross said the bill was “about so you can get a headline up the Fox Valley saying that Mark Harris is double dipping because he may continue to serve for a period of time as county executive, because he was elected to that position, while perhaps being elected to the 18th District.”

If Harris is elected to the state Senate, he would take office in January 2017, four months before his term as county executive ends in April 2017.

Waukesha County Executive Paul Farrow, a Republican, briefly held onto his state Senate seat after being elected county executive in 2015. Farrow testified in support of the bill.