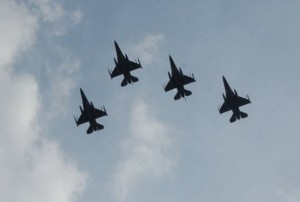 A Wisconsin Congressman wants to make it easier for special events to get military flyovers.

U.S. Rep. Sean Duffy (R-WI) says these flyovers are an important part of American celebrations. “They allow the American people to celebrate their patriotism and witness service members in action.”  He’d like to move control of those flyovers away from the Pentagon and to the regional level.  “In recent years it’s become far more challenging to get permission for those flyovers because of all the paperwork and red tape in the Pentagon.”

Duffy’s bill, called the Sound of Freedom Act, would give State Adjutant Generals of the National Guard and Reserves the call on how and when those flyovers are made.  “Should an eligible event match up with a predetermined flight training schedule, there is no reason why a local commander should not be empowered to decide whether a flyover should take place.”

There had been some recent controversy over the Pentagon paying for special patriotic tributes and ceremonies at sporting events, but Duffy says this would have nothing to do with that. He calls that funding ‘advertising’ for the Defense Department, and that the flyovers would have no fiscal impact on taxpayers.  “Our pilots need to get X number hours of training in every month.  So this is part of their training mission, they can coordinate it with a flyover.  There’s no additional cost here.”

Part of the Sound of Freedom Act would ask for a cost benefit analysis for the program, especially looking for the added incentives when it comes to recruitment and public relations.