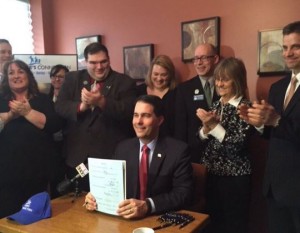 Wisconsin’s Planned Parenthood clinics could lose up to $7.5 million in funding, under a pair of bills signed into law Thursday morning by Governor Scott Walker.

One of the bills prohibits the use of Title X federal grant money by organizations that provide abortions, even though that funding is used to provide health screenings and family planning services. The other reduces the reimbursement rates Planned Parenthood facilities can receive under the Medicaid program.

Walker signed both bills during a ceremony in Waukesha at a Crisis Pregnancy Center. In a statement, he said “today, we signed two bills into law that prioritize women’s health while improving government and its services to the citizens of Wisconsin.”

Planned Parenthood officials blasted both measures, which the provider argues are part of an effort to block access to essential health care services offered by its clinic. Planned Parenthood Advocates of Wisconsin executive director Tanya Atkinson said “The political motivation behind these bills is clear. Opponents of women’s health will stop at nothing to prevent Planned Parenthood from providing much needed medical care in the community.”

Atkinson warned that the bills will have “deeply troubling consequences” for women seeking medical care in the state. “It’s appalling that legislators are pushing their extreme agenda without considering its dangerous effects,” she said.

Backers of the legislation have argued that women will be able to access many of the same services through other providers. In his statement, Walker noted that one of the bills requires the Department of Health Services to apply for the federal funds, and direct them to “less controversial providers.”