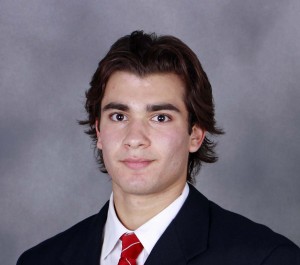 Luke Kunin’s second goal of the game came with 27 seconds left in the third period, helping the Wisconsin men’s hockey team skate away with a 4-4 tie with Big Ten leading Michigan on Saturday night at the Kohl Center.

Wisconsin (6-13-1, 1-8-3 Big Ten) pulled goaltender Matt Jurusik with 1:21 left to play and put a number of shots on Wolverines goaltender Steve Racine.  But it was Kunin won found the back of the net with his 12th goal of the season that saved the day for the Badgers.

The Badgers lost Friday night 4-1 and the Wolverines scored the only goal in the succeeding shootout on Saturday night to be awarded the extra point in the Big Ten standings.

The Badgers return to home ice this coming weekend when they host Michigan State.  Wisconsin’s only Big Ten win came in East Lansing on December 12th, a 3-0 Badger victory.