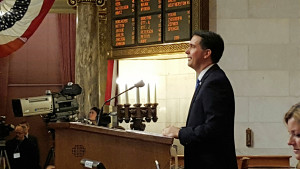 A continued decline in state revenue projections could have an impact on what bills the Wisconsin legislature passes this spring.

A report from the state Legislative Fiscal Bureau last month showed the state is still expected to end the budget biennium next year with a surplus – although the size of the ending balance dropped by over $94 million from previous estimates. The end result is that lawmakers have less money to work with as they head into the finals days of the spring legislative session.

Governor Scott Walker said in Madison Wednesday that the drop could force them to make decisions about what bills come across his desk in the coming months. While he didn’t want to give an actual limit, the governor did say that spending anything over $20 million could be a “bit of a challenge.”

Walker has laid out his agenda for the spring, which includes efforts to improve college affordability and access to job training programs. Republicans in the Legislature have an agenda that includes expanding programs to help those suffering from Alzheimer’s disease and dementia, along with tax changes related to the state’s managed forest program. When combined, those proposals carry price tags that could easily pass the $20 million mark.

Walker said his priority remains on education. “We can do the student loan, there’s probably a little room for some of the others, tweaking things here or there…but we want to keep it pretty conservative,” he said, also noting that he would like to start the next budget biennium with a good base.

The governor noted there are areas lawmakers can focus on to help find some savings, such as a plan mentioned in his State of the State address to move state employees to a self-insurance system. A report released in November said that could save the state $42 million a year, which Walker believes could be used to help boost public education funding and other priorities.