You are here: Home / News / Lincoln statue restored in Burlington 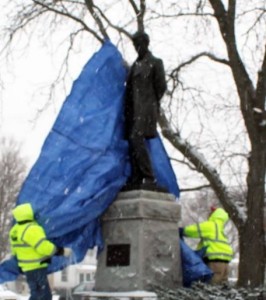 A 103-year-old statue of Abraham Lincoln is back on its pedestal in the city of Burlington, just in time for President’s Day.

With snow falling around them on Sunday, about 100 people turned out for a rededication ceremony. Burlington Historical Society President Dennis Tulley praised the many volunteers who helped with the cleanup and restoration of the statue, which was knocked down in an act of vandalism on January 30. A 22-year-old Burlington man is facing felony charges in the incident.

Lincoln expert Steve Rogstad of Racine praised the community for moving quickly to return the statue to its rightful place. “The city of Burlington, the community of Burlington, and everybody that had anything to do with this, earns a really great round of applause for getting Lincoln back up on his feet two days after his birthday,” he said.

The ceremony included a procession of members of the Sons of Union Veterans in Civil War-era uniforms and a Lincoln re-enactor dressed as the 16th president.