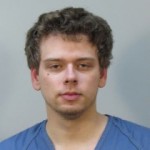 Madison Police are investigating the first homicide shooting of the year. Officers arriving at the parking lot of Metro Market on Cottage Grove Road on the city’s east side at around 8:00 p.m. Tuesday found a 24-year-old woman shot in the head. She was taken to an area hospital and Chief Mike Koval said she was pronounced dead about 8:30 p.m.

A witness across the street from the store alerted police after hearing shots fired.

Police have been searching several locations for a suspect, identified as Christopher O’Kroley. He’s described as a 26-year-old, white man, 6′ tall and weighs 180 pounds. O’Kroley is believed to be driving a 2000 VW Jetta with a Wisconsin license plate 720-KRW. Officers were outside O’Kroley’s residence, a duplex in the 800 block of North Thompson Drive, on Wednesday morning.

Koval said preliminary information shows that O’Kroley and the victim knew each other; however, the relationship is not known at this time. The victim’s name has not been released, but police say she was from Stoughton.