You are here: Home / Sports / Sabin named MWC Performer of the Week 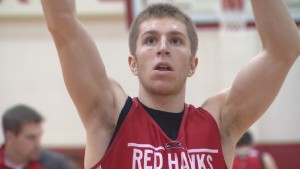 For the third time this season and fifth time in his career, Ripon College men’s basketball guard Ty Sabin has been named Midwest Conference Men’s Basketball Performer of the Week.

Sabin led Ripon to a pair of wins last week, averaging 36 points, 4.5 rebounds, two assists and one steal per game, while shooting 50-percent (26-of-52) from the field and 59-percent (13-of-22) from three-point range.  In Saturday’s 78-77 overtime win over Cornell, Sabin posted a single game school record of 51 points and hitting 11 three-pointers, including the game-winner at the buzzer.

Sabin has now scored over 500 points for the season, making him just the fourth player in school history to accomplish that feat.

Sabin has scored in double figures in all 68 games of his collegiate career and ranks second, across all NCAA Divisions, in career scoring average at 24.5 points a game.