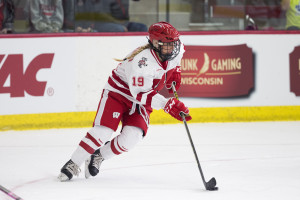 The U.S. roster for the 2016 International Ice Hockey Federation Women’s World Championship has a Wisconsin flair as six Badgers, one current and five former, make up more than one-fourth of the 23-player roster that was announced Wednesday by USA Hockey.

The Laguna Hills, California native leads the Badgers this season with 20 goals and 32 assists for 52 points.  She became the first UW player to score 50 points in a season since Decker in 2012-13.