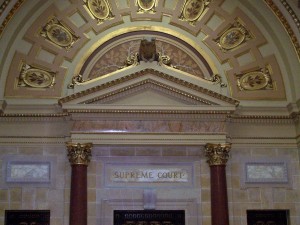 The state Supreme Court is being asked to let Milwaukee ignore a 2013 state law that lifted residency requirements for local government employees, including police officers and fire fighters.

Milwaukee challenged the law, arguing its residency requirement is part of a 1938 charter ordinance that’s protected under the home rule provision of the state constitution. City attorney Miriam Horowitz defended that position Tuesday before the state Supreme Court. “If it is truly a local concern, as this residency issue is, then it should be left to the local government,” she claimed.

Attorney Jonathan Cermele represents the union groups who argue that protection doesn’t apply though, because the law is in effect statewide. “The issue of residency is primarily one of statewide concern,” he claimed, noting that several other communities had residency requirements in place that were impacted by the law.

An appeals court previously upheld Milwaukee’s position. Justices could issue a decision in the case later this year.