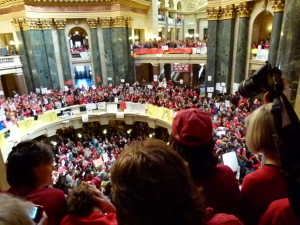 Five years after he introduced the bill that would later become Act 10, Governor Scott Walker believes it has made Wisconsin a better place.

“Local officials now can drive those decisions and respond to the people that they represent, as opposed to a number of things being off the table,” Walker said Thursday morning during a stop in Milwaukee.

The governor said the proposal, which essentially eliminated collective bargaining for most public sector workers, gave local governments more flexibility to deal with tough financial decisions. “I was a local official before I was in state government – without a doubt one of the biggest barriers for us to making decisions on behalf of the people that we served…was collective bargaining.”

Introduction of the bill, originally offered as a budget repair measure, sparked weeks of protests at the Capitol and saw Democratic members of the state Senate fleeing to Illinois to stall the vote. Assembly Democratic Leader Peter Barca (D-Kenosha) said that political turmoil persists to this day. “It’s caused us to be the most polarized state in the country,” he said. “That produces a very difficult environment to work together to accomplish things.”

Walker counters that the state was already politically divided before he introduced his bill though, although he believes the protests and interests from outside of the state accelerated the debate around his bill. He said that has died down in the past five years, and “where we stand today is not unlike where we were after the 2000 and 2004 presidential election.”