You are here: Home / Badgers / Watt adds another Defensive Player of the Year honor 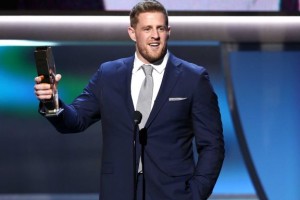 Houston Texans defensive end J.J. Watt is the NFL’s Defensive Player of the Year for the second straight season and third time in his career.

Watt won the award on Saturday night at the NFL Honors event in San Francisco.

Watt tallied 76 tackles, 17.5 sacks, eight passes defensed and three forced fumbles for the Texans this past season.  Houston finished the regular season with a 9-7 record and champions of the AFC South.