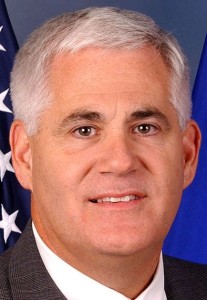 The secretary of the Wisconsin Department of Corrections has resigned, in the midst of a scandal surrounding a state facility for juvenile offenders.

Corrections Secretary Ed Wall will step down by the end of this month, with former DOC secretary Jon Litscher stepping in to the position. Wall has served as secretary of the agency overseeing Wisconsin’s prison and parole system since October of 2012.
Governor Scott Walker’s administration made the announcement Friday, seven days after Wall submitted his letter of resignation.

Wall’s resignation comes as his agency faces a firestorm of criticism over allegations that young offenders were abused at the state’s Lincoln Hills facility. The claims sparked a John Doe probe at the facility, and resulted in several staff members resigning or being placed on leave.

The announcement of his departure came shortly after a report by the Milwaukee Journal Sentinel that the FBI is now taking a lead role in the probe. It also followed reports Thursday that Walker’s administration was made aware of safety concerns at the facility as early as 2012.

Wall did not address the issue in resignation letter, only saying that “I believe the time has come to turn the page for the Department of Corrections and step aside to allow a new person with fresh perspectives to lead the agency forward.”Litscher’s first day serving as Secretary will be February 29, 2016.

News of Wall’s resignation was met with praise from critics of the agency. Although, many noted that his departure does not resolve deeper problems at the agency. In a statement AFSCME Council 32 executive director Rick Badger said the organization has long pushed for Wall’s dismissal. “We believe Wall’s departure is long overdue. We’ve been calling for it for months. But it does not solve the problem because it’s a problem that starts at the very top.”