You are here: Home / Crime / Courts / A ‘major disruption’ to meth supply in northeast Wisconsin (VIDEO) 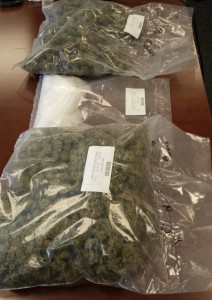 Some of the drugs seized in raids this week.

Authorities are talking more about a major drug trafficking bust earlier this week in Northeast Wisconsin.

According to the Brown County Sheriff’s Department, the Brown County Drug Task Force identified a large scale drug trafficking organization during late summer/early fall of 2015. The group focused on distributing methamphetamine not only in Brown County, but throughout Northeastern Wisconsin.

Authorities said that the Drug Task Force didn’t have the capacity to conduct an investigation of this size alone. They sought help from law enforcement partners including the Wisconsin Department of Justice, Division of Criminal Investigation (DCI), and the U.S. Department of Justice’s Drug Enforcement Administration (DEA) along with neighboring drug task force units.

The culmination of this investigation happened on Tuesday, when over 100 law enforcement officers assisted in serving 20 search warrants in Brown, Oconto, and Kewaunee counties. In all, 38 people were arrested with 35 of those booked into the Brown County Jail on charges.

“It was a combination of information received during other investigations, basically information from community members, citizens complaining about drug houses,” said Brown County Sheriff’s Department Lt. Kevin Kinnard, who heads the Drug Task Force. “Patrol officers doing what they do every day in arresting people with methamphetamine present and getting information.”

Reports suggest that 35-year-old Bill Yang is considered the leader, or as Kinnard terms it, the “middler” of the organization. However, no one would confirm that.

“The person we have in custody here is the middler and head of the organization here in Northeast Wisconsin,” Kinnard said. “Then beyond that it goes back to Minneapolis/St. Paul which DEA in Minneapolis is investigating, and then I don’t have information where it goes from there.”

The meth seized in this case, according to law enforcement, was produced in Mexico and moved into Minneapolis/St. Paul. From there, it was trafficked to our area where the organization would sell it to addicts. The origin of the marijuana and other drugs taken in this case was not revealed.

At Friday’s press conference, authorities would not comment on any of the suspects in this case. The investigation is ongoing and many of the court documents have been sealed.

CONCERN ABOUT FILLING THE GAP

“We created a major disruption in the methamphetamine supply flowing into Northeastern Wisconsin,” Lt. Kinnard stated.

To that end, authorities realize that the demand created by users ultimately determines whether or not meth or any illegal substance is available in the community. Law enforcement is strongly encouraging people struggling with drug addiction to seek help from their family, doctor or another treatment professional before causing harm that’s irreversible.

“Our concern now is that because the demand is still there, but not the supply, that we may see an increase in meth labs,” said Kinnard. “Which are not just a hazard to users, but they’re an environmental hazard and a danger to people and property depending on where they occur.”