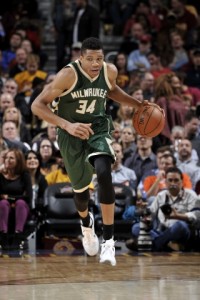 Forward Giannis Antetokounmpo posted his fourth triple-double in the last 11 games, the most by a player in a single season in Milwaukee franchise history, leading the Bucks to a 109-100 win over the Brooklyn Nets.

Antetokounmpo finished with 28 points, 14 assists and 11 rebounds.  His biggest thriller came when he grabbed the ball at the free throw line, taking just three dribbles to reach the other free throw line, where he faked a pass and slammed home a dunk that had the fans jumping from their seats.

Antetokounmpo had 12 points, nine assists and eight rebounds in the first half, nearly completing the double-double by halftime.

The Bucks finished the game on a 12-to-two run and took advantage of a dozen turnovers by the Nets in the fourth quarter, leading to 17 points.

Jason Kidd improved to six-and-one against the nets since taking over as the Bucks head coach.