You are here: Home / Sports / Antetokounmpo to handle point guard to start next season 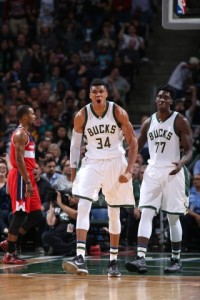 Milwaukee Bucks coach Jason Kidd likes what he’s seen from Giannis Antetokounmpo at the point guard position, so much so that Giannis will start next season as the teams point-man.

The 6’11 Antetokounmpo has recorded four triple-doubles since the change was made in early February.

“We’re going to go forward with him (Antetokounmpo) handling the ball,” Kidd said.  “You can call him point guard, point forward, point center, however you want to look at it.

“With him having the ball and the pressure he puts on the defense and his ability to find guys, has been a plus for us.”

The Bucks won’t make the playoffs this season.  They have just eight games left in the regular season, starting with a home game against the Phoenix Suns on Wednesday night at the BMO Harris Bradley Center.

Not only has Antetokounmpo handled the transition from forward to guard well, teammate Jabari Parker’s play has improved dramatically as well.