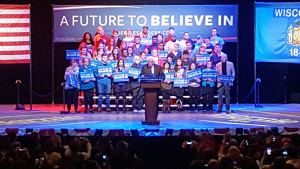 Democratic presidential hopeful Bernie Sanders says turnout will be crucial to winning Wisconsin’s primary next week, and he’s urging supporters to make sure people get to the polls and vote.

He urged those in the audience to encourage those thinking about sitting out next week to reconsider that decision, and made a direct appeal to those same voters. “For all those people who have kind of given up on the political process, have turned their backs on politics…please come out,” he said, making a similar request of young voters who may have never cast a ballot before.

The visit to Madison’s Orpheum Theater, located just two blocks from the state Capitol building, was Sanders second stop in the city in less than a week. Much like he did during a stop Saturday, Sanders aimed criticism at Republican Governor Scott Walker and changes to voting laws in the state made under his administration. Sanders described it as “voter suppression,” and called on supporters to send a message next week that those efforts will not work by turning out to vote.

Sanders is seeking the Democratic nomination against former Secretary of State Hillary Clinton, who held several campaign events in the state earlier this week. A new Marquette University Law School poll released Wednesday showed him with a slight lead over Clinton among likely voters.