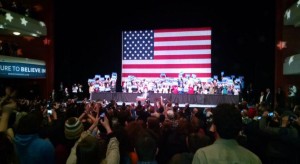 The Vermont Senator said that campaign finance reform would be a top priority, if he’s elected, noting that fellow Democratic candidate Hillary Clinton is the one with a super PAC and holding fundraisers with millionaires. “Our campaign is not representing Wall Street, corporate America, or the billionaires of this country,” he said.

Sanders also discussed raising the minimum wage and immigration reform, saying that he would use the executive powers of the presidency to do all that he can to address the issue if Congress refuses to act.

Clinton was also scheduled to be in the Fox Valley Tuesday, with a rally in Green Bay. Both candidates are looking to pick up delegates in Wisconsin’s April 5th presidential primary.