You are here: Home / News / Bradley criticized over leaving court for WMC speech 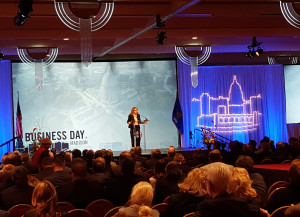 A state Supreme Court justice up for election next month is under fire for leaving court proceedings to address the state’s largest business lobbying group.

In a move her opponent called “appalling,” Justice Rebecca Bradley left the court on February 24, during oral arguments in a pending case, so she could speak at a Wisconsin Manufacturers and Commerce event taking place just a few blocks from the Capitol.

In a statement, Bradley’s campaign argued justices routinely excuse themselves from oral arguments for scheduling reasons. “Justice Bradley had reviewed all briefs in detail before the oral arguments, while on the bench she had heard answers to the queries posed by her colleagues and had no further inquiries on the merits of the case when she excused herself to attend a previously scheduled speaking engagement.”

The campaign of Appeals Court Judge JoAnne Kloppenburg, who is running against Bradley, said there is nothing routine about what the Justice did though. They accused her of disregarding her duty in order to curry favor with business leaders. “It is absolutely clear that Rebecca Bradley’s allegiance is to the big money special interests and partisan politics that she has used to fuel her fast track rise. It is appalling she would so blatantly disregard her duty and the people of Wisconsin.”

Bradley is running against Kloppenburg to retain the seat she was appointed to last fall. The election is on April 5.