You are here: Home / Brewers / Braun returns to lineup in Brewers win 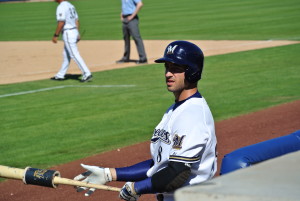 Ryan Braun’s return to the lineup was a hit for the Milwaukee Brewers in their 5-2 win over the Chicago White Sox in Cactus League play.

Braun saw his first game action following back surgery during the offseason.  He drove in a run with a single in the first, then walked and scored a run in the third before calling it a day.  Braun also ran down a fly ball down the left field line.

Matt Garza allowed just two hits in four scoreless innings.  Garza walked three and struck out two and got some help from a pair of 6-4-3 double plays.

The Brewers improved their record to 7-6-1.  They’ll play a rare night game tonight against the Texas Rangers.