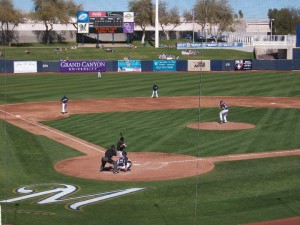 One top Milwaukee prospect shined, while another was hurt in the Brewers knocked off the UW-Milwaukee Panthers 11-2 in their exhibition opener in Phoenix.

Shortstop Orlando Arcia homered and played a solid defensive shortstop, but center-fielder Brett Phillips was pulled from the lineup at the last-minute with a sore left oblique muscle.

The Panthers had a 2-1 lead before Arcia’s two-run shot in the third inning.  Third baseman Will Middlebrooks also homered for the Brewers.

Eric Solberg’s two-run single provided all of the offense for the Panthers, while Austin Schulfer gave up both home runs and took the loss.

It’s the second straight year the team teams have met in an exhibition before the Brewers start Cactus League play.

For the Brewers, their Cactus League season starts this afternoon with split squad games against the Chicago Cubs and the San Francisco Giants.