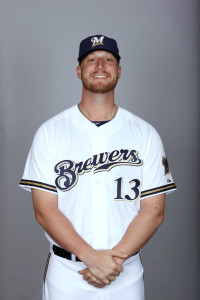 Will Smith (Photo by Jason Wise/MLB Photos via Getty Images)

The Milwaukee Brewers plans to split closing duties between Will Smith and Jeremy Jeffress could get off to a slow start.

Left-handed pitcher Will Smith was having his swollen right knee examined on Friday and the Brewers could have an announcement on Saturday.

Smith is perfect so far this spring, pitching seven scoreless innings.  he experienced soreness in his knee after pitching in a minor league game on Thursday and still had swelling on Friday morning.

Jeremy Jeffress just returned to the mound after missing a few weeks with a strained hamstring.  He could be looking at the majority of the closer action if Smith can’t go.