You are here: Home / Sports / Carter-Williams done for the season 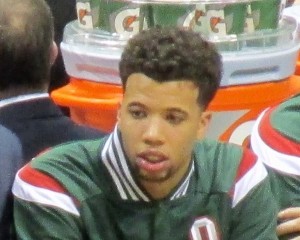 Milwaukee Bucks point guard Michael Carter-Williams will miss the rest of the season due to a hip injury and undergo surgery on Thursday.

Carter-Williams will have surgery for a torn labrum in his left hip in Colorado.

The 24-year-old Carter-Williams is in his second season with the Bucks after being acquired at the  trade deadline in February 2015.  The former NBA rookie of the year was acquired from Philadelphia in a three-team deal and the Bucks sent point guard Brandon Knight to Phoenix as part of the swap.

Carter-Williams and center Greg Monroe were moved out of the starting lineup on Feb. 9th and have been coming off the bench ever since.  O.J. Mayo and Miles Plumlee took their place in the Bucks starting lineup.