You are here: Home / News / Chelsea Clinton campaigns for mom in Wisconsin 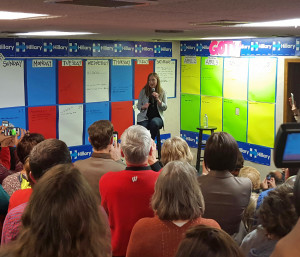 Chelsea Clinton at a campaign office in Madison. (Photo: WRN)

The daughter of Democratic presidential hopeful Hillary Clinton spent Thursday meeting with supporters across southern Wisconsin. During stops in Milwaukee, Waukesha, and Madison, Chelsea Clinton talked about the importance of getting out the vote for her mother on April 5, and what’s at stake if Democrats fail to hold on to the White House after November.

In a speech that touched on issues such as the current fight over a vacancy on the U.S. Supreme Court and blasted the field of Republican candidates for “normalizing hate speech,” Clinton also pointed to her own pregnancy and 17-month old daughter as strong reasons for why she is supporting her mother. “Becoming a parent made politics even more personal to me, because I realized on just an even deeper level that whomever we elect will play such a fundamental role in shaping the country, the world, and really the future that my children and their generation will grow up in,” she said.

Hillary Clinton has scored a number of key victories in primary votes so far, but a Marquette Law School Poll released last month showed her neck and neck with Vermont Senator Bernie Sanders among Wisconsin voters. Chelsea Clinton noted that her mother has already built up more than 2.5 million votes more than Sanders nationwide, and leads Republican frontrunner Donald Trump by more than a million. “I think we just have to keep doing what we’re doing to build that case here in Wisconsin and across the country,” she said.

Clinton is the only candidate of either party to not announce any personal appearances in the state yet, ahead of Wisconsin’s primary. Her daughter said one is coming, but they have not yet determined when or where she will visit.