You are here: Home / Packers / Crosby signs deal with Packers 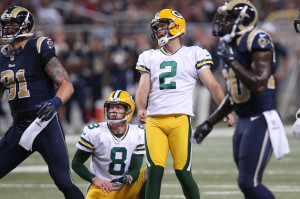 Mason Crosby will stay with the Green Bay Packers after agreeing to a four-year contract with $16.1 million.  Crosby’s deal reportedly includes a five-million dollar signing bonus.

It wasn’t long ago (2013) when Crosby agreed to take a $1.6 million pay cut after he made just 63.6-percent of his field goals the previous season.  The Packers did give Crosby the chance to earn back the money and he did.

Since his career-worst season, Crosby has made 85.7-percent of his field goals.

The 31-year-old Crosby has played nine seasons in the NFL, all with the Green Bay Packers.  He’s the Packers all-time leading scorer with 1,057 points.

Crosby made 24 of 28 field goal attempts last season, and he was one of just five NFL kickers to make all of his extra points from the new 33-yard distance.  This postseason, he set the playoff record for consecutive made field goals with 20.

The new deal makes Crosby the third-highest paid kicker in the league based on average per year ($4.025 million).  He trails only Baltimore’s Justin Tucker ($4.572 million) and New England’s Stephen Gostkowski ($4.186 million).