You are here: Home / News / Cruz rallies supporters in Janesville 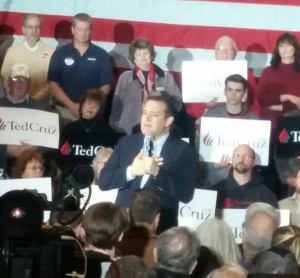 Republican presidential hopeful Ted Cruz continued his swing through Wisconsin Thursday, meeting with supporters during a rally in Janesville.

The Texas senator shared some big ideas with the crowd of about 350 people – calling for the repeal of ObamaCare, passing a flat tax, stop amnesty for illegal immigrants, and bring manufacturing jobs back to the U.S. and Wisconsin. Cruz also tipped his hat to Wisconsin GOP leaders, such as Governor Scott Walker and House Speaker Paul Ryan, who is from Janesville. “Wisconsin is known for producing fighters,” he said.

Walker and Ryan have not yet endorsed any candidates in the race, although Walker said this week he believes Cruz has the best chance of beating front-runner Donald Trump in the race for the nomination. Walker has said any endorsement would come ahead of the April 5 primary election.

The campaign stop in Janesville is just one of several stops Cruz is making in Wisconsin, with appearances planned today in Oshkosh and Green Bay. Ohio Governor John Kasich, who is also seeking the GOP nomination, was in the Milwaukee-area earlier this week and has town halls planned in West Salem and Madison next Monday. Trump plans to hold a rally in Janesville next Tuesday.

On the Democratic side, Vermont Senator Bernie Sanders plans to hold a rally in Madison on Saturday. Former Secretary of State Hillary Clinton has not yet scheduled any campaign stops in Wisconsin, although Chelsea Clinton – her daughter – said Thursday that she is expected to visit the state ahead of the primary.