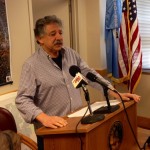 There was more back and forth this week, on who knew what and when they knew it, regarding the closure of Madison’s Oscar Mayer plant.

Madison Mayor Paul Soglin has criticized the Wisconsin Economic Development Corporation and the state’s business lobby, Wisconsin Manufacturers and Commerce, for failing to know that Kraft-Heinz was planning to close the plant.

“The mayor has been almost, you know, over the top in continuing to say that they just had no idea that any of that any of this was going on,” the Juneau Republican said. “I think it’s worth our time to see kind of what people knew, so we can go back and revisit it, so we know this isn’t going to happen again in the future.”

Soglin responded during a press conference on Thursday.

“WMC and WEDC had information about other states trying to lure Kraft companies,” the mayor said. “They had information about the possible closing of other Kraft facilities, and they blew it off.” Soglin said he spoke with Oscar Mayer representatives, to offer assistance with anything they needed, and that offer was declined.

Kraft-Heinz announced last November that it would wind down production at the more than 100-year-old Oscar Mayer plant on Madison’s north side, and move that work to Davenport, Iowa. The Madison facility employs about 1.200 people.