You are here: Home / News / Flood warnings continue across Wisconsin 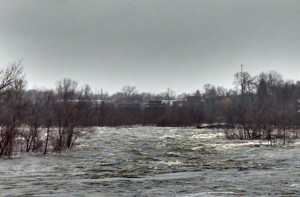 Heavy rains and high winds this week have caused a number of problems around the state. While some flood waters have receded, Wisconsin Emergency Management says at least eight rivers continue to have flood warnings in place because of rain that fell earlier this week and melting snow.

Major floods are still predicted for the Wisconsin River at Portage, which is expected to crest Saturday at almost 2.5 feet above its flood stage. Portage prison inmates have been making sandbags, and the river is not expected to return within its banks until next Tuesday. The Black River was more than three feet above its flood stage at Black River Falls this morning, although only minor flooding is predicted.

The National Weather Service has added the Wolf River in Waupaca and Outagamie counties to the list of warnings it put out Thursday. Similar warnings remain in effect on parts of the Fox, Yellow, Eau Claire, and Chippewa Rivers.

State officials say there have been numerous reports of trees downed and road washouts throughout the state this week. WEM is advising people who come across a flooded road to turn around and find another route.