You are here: Home / News / Focus on presidential race intensifies in Wisconsin 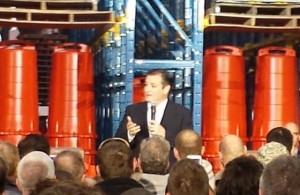 With just over a week to go before the primary, the presidential race is heating up in Wisconsin.

Several of the candidates were in the state last week, and many more stops are expected in the coming days. With Wisconsin’s April 5 primary standing alone, Marquette University Law School political scientist Charles Franklin says we can expect to be the focal point of the race for the next eight days. “With the field narrowing on the Republican side, and with (Hillary) Clinton and (Bernie) Sanders getting ready for their final resolution on the nomination, both parties are putting a lot of effort in here,” he said.

Those intensified efforts mean Wisconsin residents will likely be seeing a lot of the candidates in the coming days, with coverage of visits and advertising blanketing the airwaves and online outlets. Franklin expects the candidates will stick pretty close to their talking points during stops, although they could make more tactical criticisms about their opponents. For example, Franklin notes the exchanges between GOP front-runner Donald Trump and Ted Cruz last week, regarding Cruz’s wife Heidi. The Texas Senator criticized Trump during multiple stops in the state for “stoking” false rumors about his family.

UW-Madison journalism professor Mike Wagner says the many visits in the state provide an opportunity for voters to learn more about the candidates, and to press them for details on some of the sweeping plans Republicans in particular have touted on the campaign trail. “One thing that Wisconsin voters are famous for wanting to know are the details, and so an opportunity is before them to demand these details from the folks who want to be the next president,” he says.

The greater focus on the presidential race could distract some attention away from the state Supreme Court race, which is also on the April 5 ballot, while also influencing the outcome. Franklin says the contentious fight for the GOP nomination and undecided Democratic ticket may be enough to get voters from both parties out to the polls. However, if one side is more effective at motivating voters, it could swing the results of the already close race between Justice Rebecca Bradley and Appeals Court Judge JoAnne Kloppenburg.

Whether that happens though, Franklin says, really will not be known until voters head to the polls next week.

The candidates will be highly visible in the state this week. Here’s a list of some of the known events going on: