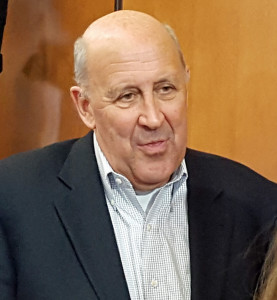 While he supported Barack Obama in 2008, former Wisconsin Governor Jim Doyle plans to help Democrat Hillary Clinton in the presidential race this time around.

During a Clinton stop in Madison this week, Doyle said he made the decision to support the former of Secretary of State while watching the Republican and Democratic presidential debates last year. He said that while watching the candidates, he realized there “really was only one person on either stage who could take on the incredible job of being president of the United States…and that was Hillary Clinton.”

Doyle was a big Obama backer eight years ago, although he said he still felt at the time that Clinton would have been a fine president as well. “She ran up against a very very unique kind of once in a lifetime type of candidate,” he said, pointing out that Clinton learned lessons from that contest that will carry over in this election.

The former governor also dismissed talk from those who might suggest it’s Clinton’s turn for the presidency. “I don’t think it’s every anybody’s time,” Doyle said. “It’s never anybody’s right or inheritance.”

Doyle said he has no problem with Vermont Senator Bernie Sanders, who is also seeking the nomination, but he feels Clinton is the better choice right now. He added that Sanders deserves a lot of credit for running a good campaign, which he believes has strengthened the Democratic field.

Wisconsin has consistently voted for the Democratic nominee since 1988, and Doyle said he sees no reason for that to change this fall, no matter who is nominated. “It’s hard for me to imagine how Wisconsin goes from voting overwhelmingly twice for Barack Obama to somehow voting for Donald Trump or Ted Cruz,” he said. “They shouldn’t take us for granted, but I have little doubt that Hillary Clinton would carry Wisconsin.”