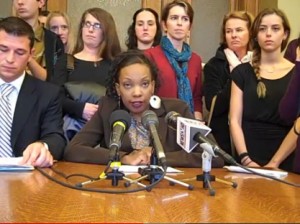 Former state Representative Tamara Grigsby has died of health complications. Grigsby, who dealt with cancer during her time in the Legislature, was 41. She served as a Democrat representing parts of Milwaukee in the 18th Assembly District from 2005 until 2013, when she stepped down.

Dane County Executive Joe Parisi announced Grigsby’s death on Tuesday. A press release from Parisi’s office said Grigsby had worked most recently as the appointed Director of the new Dane County Department of Equity and Inclusion. Prior to that, she worked as Parisi’s Community Outreach Coordinator.

“Tamara was a special human being whose sole motivation in life was to make a difference in the lives of others – a goal at which she excelled. She was a public servant to be emulated, but more than that she was our friend, and we will miss her so.”