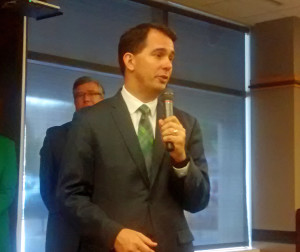 The state and doctors will have new tools to help fight opiate addictions statewide, under a series of bill signed into law by Governor Scott Walker.

The governor signed eight bills Thursday, during a series of stops at health clinics around the state. Several of the measures target the state’s heroin epidemic by going after a common starting point for an addiction – prescription drug abuse. “All too often, people who get addicted to heroin start out early and they start out with prescription drugs,” Walker said following a bill signing in Wausau.

The package of bills include requiring doctors to check a statewide database of prescription narcotics before prescribing those medications, shorten the reporting period for updating that database, and require pain management clinics to seek state certification. Another measure would criminalize the use or creation of ways to cheat a drug test.

The proposals were part of the HOPE Agenda, an effort championed by state Rep. John Nygren (R-Marinette). The Marinette Republican has led a multi-session crusade to combat heroin abuse in the state that was inspired by his own daughter’s struggles with the drug. He called the bills signed Thursday an important step in changing the dialogue about addiction, by focusing on a problem that sparks nearly 80 percent of opiate addictions. “Rather than addiction being a moral failing, we need to understand that this is a medical issue…that it is truly a disease that we can attack and we can win,” Nygren said.

Affiliates WSAU and WAYY contributed to this report.