You are here: Home / Badgers / Granato named head coach of the Hockey Badgers 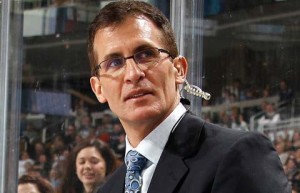 He has also served as an assistant with Colorado, Pittsburgh and now Detroit.  The four-time 30-goal scorer in the NHL has skated for the New York Rangers, Los Angeles Kings and San Jose Sharks during his 13-year playing career.

Granato was a two-time All-American for the Badgers and a finalist for the 1987 Hobey Baker Award after a 73-point season.

Don Granato (Tony’s brother) has spent nearly five seasons as a head coach with the U.S. National Team Development Program (US NTDP).  While with the US NTDP, Granato helped develop some of the world’s best young players, including UW freshman Luke Kunin, as well as other potential 2016 NHL first-round draft picks.

Don Granato also has NHL coaching experience, serving as an assistant for the St. Louis Blues during the 2005-06 season.  He also spent years as a head coach in junior and minor-league hockey.

During his playing career at Wisconsin, Granato helped the Badgers win the 1990 NCAA title and ended his UW playing career with 88 points on 45 goals and 43 assists.

Mark Osiecki returns to coach in Madison after serving as the associated head coach for the AHL’s Rockford IceHogs for the past two years.

Osiecki served as the head coach at Ohio State from 2010-13 following a stint as an assistant with the Badgers.  During his time in Madison from 2004-10, Osiecki was the recruiting coordinator and defensive coach, helping UW win the NCAA title in 2006.  Twenty-two of the Badgers who played for Wisconsin during the six seasons Osiecki was part of the coaching staff went on to play in the NHL.

Osiecki enjoyed a six-year pro career, including two years in the NHL with the Calgary Flames, Ottawa Senators, Winnipeg Jets and the Minnesota North Stars.

Osiecki was a three-year letter-winner for the Badgers from 1987-90.  He served as an alternate captain for the 1990 NCAA Championship team, the program’s fifth national championship squad.

Granato, Granato and Osiecki are officially being welcomed at a Kohl Center event this afternoon.