You are here: Home / Sports / Green Bay Phoenix to open with Texas A & M in NCAA’s (AUDIO) 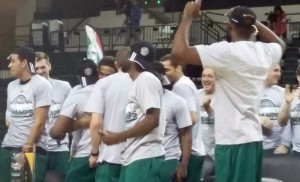 Phoenix players celebrate their NCAA draw against Texas A & M.

The Green Bay Phoenix are headed to the NCAA Tournament for the first time in 20 years.

The Phoenix (23-12, 11-7 Horizon League) captured the Horizon League tournament title by knocking off regular season champion Valparaiso in the semifinals, followed by a victory over Wright State in the title game.

Green Bay has won eight of their last nine games and was handed the 14-seed in the West Region and will open up against third-seed Texas A & M in Oklahoma City on Friday night (6:20 on TBS).

“I thought for sure we’d be a 15,” coach Linc Darner said.  “That’s kind of what I was thinking we were going to be today, so I’m a little bit surprised.  But we’re happy.”

“A lot of excitement,” said Darner.  “This is what you work for.  This is why I coach, to get into the NCAA Tournament and see what we can do.  I think this is excitement for the players.  They’ve been close and they got over the hump this year.”

The Phoenix actually caught a sneak preview of the Aggies earlier in the day.  Linc Darner put his team through a light workout earlier in the day, before they all sat down to watch the SEC championship game between Texas A & M and Kentucky.

Friday’s game will be the second time the two schools will have met.  The first was in 1996 when the Phoenix knocked off the Aggies, 60-49, in a game played in Milwaukee as part of the First Bank Classic.

AUDIO: Linc Darner says this is a great feeling :15

AUDIO: Darner says this is an exciting time for his players :17