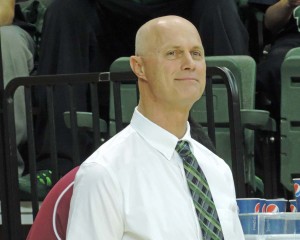 The Green Bay Phoenix women’s basketball team drew a ten-seed and will face seventh-seeded Tennessee in the opening round of the NCAA basketball tournament on Friday.  The two teams will tip in Tempe, Arizona at 4 p.m. on Friday on ESPN2.

The Phoenix is making its 16th appearance in the NCAA Tournament and has gone six-and-15 in tournament play.

This Tennessee team is 19-and-13 overall and eight-and-eight in the SEC.  The Volunteers went five-and-five in the last ten games, falling to Mississippi State on the conference semifinals on Saturday.

Those numbers are encouraging for the Phoenix, but Green Bay is well aware of the history of this Tennessee program.

The Phoenix players grew up watching the Volunteers under legendary coach Pat Summitt.  She coached at Tennessee from 1974 to 2012 and walked away with eight national championships.  That number is second only to UConn’s 10.  Tennessee has also won 16 SEC regular-season titles and 16 tournament championships.

The Volunteers have played in the NCAA tournament in all 35 of its seasons, which started in 1982.  The Volunteers are 120-26 all-time.

Green Bay Coach Kevin Borseth knows this game will be as tough as all the rest have been.  He said the expectation of the program seems to be to get to the NCAA Tournament.  This year, they’re hoping to stick around for a while.

AUDIO: Kevin Borseth asked if there is pressure to advance beyond first round :21

AUDIO: Borseth, can they get back to the 2nd round