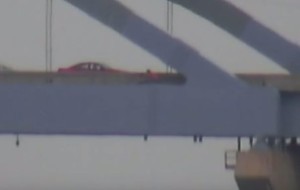 One man is being praised as a good Samaritan for saving a young woman from jumping off an bridge in Green Bay.

Green Bay police say Robert Vine was driving over the Leo Frigo Bridge Tuesday, when he saw the 18-year-old along the girders holding a teddy bear.

Chad Hooyman is Vine’s friend and says that what he did this week, is true to his nature. “He had no fear up there, so he was able to just react to the situation and take care of it.”

Vine, who is an iron worker, was used to the heights and didn’t think twice about helping the woman.

In video of the rescue, you can see Vine grab the woman’s ankle and pull her to safety.