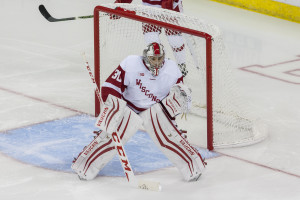 The Wisconsin men’s hockey team honored its senior class on Saturday night by knocking off 14th-ranked Penn State 4-3 at the Kohl Center.

Jurusik made 19 saves in the final period to hold off a Penn State rally. The Nittany Lions drew within two with 10:46 left when David Goodwin’s one-timer beat Jurusik on a Nittany Lion power play.

Nine minutes later with 1:46 left in the game, PSU trimmed the lead to just one when Andrew Sturts poked home his own rebound on a short-handed rush.

Wisconsin defenseman Kevin Schulze was then called for hooking and the Badgers weathered the storm and held on for the win.

Wisconsin closes out the regular season this weekend with a trip to Minnesota and a Friday-Saturday series with the Gophers.