You are here: Home / Sports / Is this it for Marquette’s Ellenson? 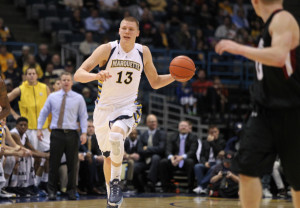 The Marquette Golden Eagles will play their final Big East home game on Tuesday night against the Georgetown Hoyas.  It’ll be the final home game for senior Michael Mache, who is a former walk-on and earned a scholarship at the start of this semester.

Mache will be honored before the game, but Marquette fans will quickly turn their focus to freshman Henry Ellenson.

The Rice Lake, Wisconsin native is averaging 16.6 points and 9.8 rebounds per game.  He broke the school’s freshman scoring record last Saturday and this week has been honored with his 7th Big East Freshman of the Week award.  Ellenson was also named one of five finalists for the Wayman Tisdale national freshman of the year award.

Ellenson is expected to be a certain first-round pick in the upcoming NBA Draft and could go in the Draft Lottery.

Entering Marquette, Ellenson said he expected to be one and done with the Golden Eagles.

While Marquette has plenty of young talent and another excellent recruiting class coming in, having to move forward without Ellenson would be a tough blow for both the fans and the program.

With two games left, Marquette needs to win twice to avoid having to play on the first day of the upcoming Big East tournament.