You are here: Home / Legislature / Litscher hopes to restore trust in Department of Corrections 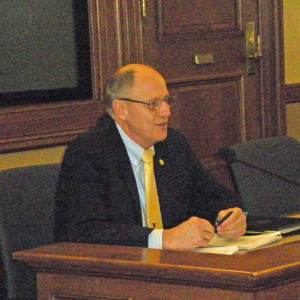 Jon Litscher will try to restore trust in the Wisconsin Department of Corrections. Litscher, who served as DOC Secretary from 1999 to 2003, takes the helm at the agency in the midst of ongoing investigations into the Lincoln Hills facility for boys.

“The department has many issues that we have to face, and many serious concerns that are being addressed, both at our juvenile facility in Lincoln Hills, but also issues throughout the entire Department of Corrections,” Litscher told members of the state Senate Judiciary Committee on Wednesday.

“Lincoln Hills is of primary concern to me personally, because I believe sincerely and seriously that care and treatment of our young juvenile offenders is a goal we should all take with great seriousness, and with compassion,” Litscher said.

Former Corrections Secretary Ed Wall resigned on February 5th. Governor Scott Walker announced a week later that he had appointed Litscher to the post. The committee hearing on Litscher’s appointment came as the U.S. Department of Justice has taken the lead in a criminal probe into reports of abuse at Lincoln Hills, which U.S. Attorney John Vaudreuil said remains under review by a grand jury.

State Senator Lena Taylor (D-Milwaukee) told Litscher that the situation at Lincoln Hills is of concern to her, as well as to the families of the younger offenders incarcerated at the facility located north of Wausau. “We’re creating harm,” Taylor said. “I need to know what is happening, that we are not moving more rapidly on building some of that trust, that needs to happen for the community and for parents.”