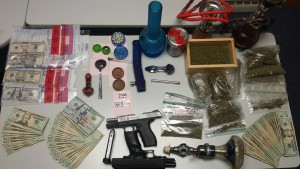 Police used warrants to search two homes in Mauston and a vehicle in New Lisbon on Friday. Officers seized over 264 grams of marijuana and methamphetamine, $2,800 in cash, over $1,600 in counterfeit currency, two vehicles, two guns, and ammunition.

The eight people arrested, ranging in age from 17 to 47, face charges that include drug trafficking and possession, contributing to the delinquency of a minor. Mauston Police note several of the crimes occurred within 1,000 feet of a school, which enhanced the charges.