You are here: Home / Packers / Packers not likely to use franchise tag on Crosby 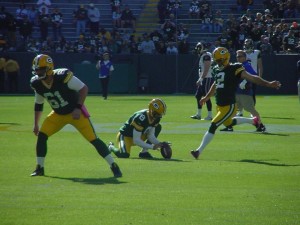 None of the other Packers free agents, including nose tackle B.J. Raji, cornerback Casey Hayward and linebacker Mike Neal, appear to be candidates for a tag.

If Packers general manager Ted Thompson doesn’t use a tag, it’ll be the sixth straight year he will have banked on their ability to negotiate a deal before one of the team’s key free agents takes an offer from another NFL team.

Crosby’s next contract will likely put him among the highest paid kickers in the league.  He’s coming off one of his best seasons, converting a combined 93.4% of his field goals and extra points, which ranks third among the top 11 best-paid kickers in the NFL.  He was one of only five kickers not to miss an extra point in the regular season or playoffs.

Without using a franchise tag, the Packers would have exclusive negotiating rights with Crosby until next Monday and exclusive signing rights until March 9.  But once free agency starts, Crosby can sign with any NFL team.

After the last season ended, Crosby said he wants to stay with the Packers, the only team he’s ever played for.  It is fairly certain that the two sides will be able to work out a deal before free agency begins to keep Crosby in a Packers uniform.