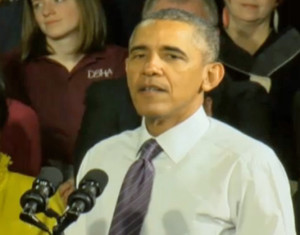 President Barack Obama was in Milwaukee for a visit that was part of a ObamaCare sign-up challenge Brent Brown introduced the president and credited Obamacare with saving his life. And the Mosinee resident made an admission that appeared to catch the crowd at the United Community Center on the city’s south side off guard.

“To be clear, I have never voted for President Obama, ever. I am a Republican who cursed his name, who falsely accused him, and someone who zealously worked to ensure that he would never be my president,” Brown said, adding that the ACA allowed him to recover from an autoimmune disease. He called on Republicans to end their efforts to repeal Obamacare.

“Brent is why we fought so hard to fix a broken health care system in the first place,” Obama said. “It wasn’t about Democrats or Republicans, it was about our values as Americans.”

About 38,000 Milwaukee residents signed up through the federal insurance exchanges during last year’s enrollment period. First prize in the competition was a presidential visit. “You’re insurance is better than it was, even if you don’t know it. Even if you didn’t vote for me,” the president said. “Thanks Obama!”

The president also called out Wisconsin Republican politicians who continue to oppose the ACA.

“Your governor still refuses to expand Medicare in this state. And we could cover another 21,000 Wisconsinites with a stroke of his pen. He could join 31 other governors who are taking this option, which by the way actually would save money. He’s denying Wisconsinites their ticket to health insurance, and it’s political. Your senior Senator won’t tell you that if he gets his way and repeals Obamacare, millions of working families would see their insurance premiums spike. The leader of the Republicans in Congress, who lives just south of here, won’t tell that if he got his way and appeals Obamacare, millions of women would go back to paying higher premiums just because their women, millions of seniors would see the price of their prescription drugs shoot up.”

U.S. Senator Ron Johnson responded to the president’s visit with a statement:

“The Patient Protection and Affordable Care Act has not lived up to its name in Wisconsin or the rest of America. In spite of President Obama’s repeated assurances, millions of Americans and thousands of Wisconsinites lost health insurance they liked and could afford and have also lost access to doctors they trusted. For many, premiums, deductibles and out-of-pocket maximums have skyrocketed instead of being reduced by $2,500 per family per year as President Obama and other proponents of Obamacare also promised.

“And the real damage to real people doesn’t end there. In Milwaukee, 1,200 people are losing their jobs because Obamacare is driving a major health insurer out of the field. No wonder one in five Wisconsinites told researchers for Harvard and the widely respected Robert Wood Johnson Foundation that Obamacare has hurt them personally, with 41% of Wisconsinites saying their health care has grown more unaffordable over the past two years. We need to repeal and replace Obamacare with reforms that preserve patient freedom and choice, constrains cost increases, and improves access to higher quality care.”

“We are going to keep working to make health care even better,” Obama said. “There are things that I would love to work with the Republicans on in the closing months of my presidency, to fine tune this thing and identify ways that we could improve quality even more and reduce prices even more.”