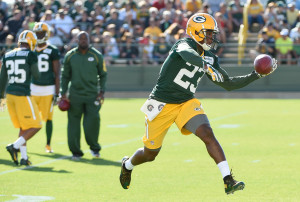 Green Bay Packers’ corner Damarious Randall was freed without arrest, after driving a car in which a former college teammate was cited for having marijuana.

The incident took place late Sunday night, when police in Scottsdale, Arizona, stopped a black Maserati that did not have a license plate.

Police officers say they detected a strong odor of marijuana inside the vehicle, and Houston Texans receiver Jaelen Strong admitted it was his.  Randall and another passenger were freed.

The 23-year-old Randall and Strong were teammates at Arizona State, and the Packers’ first rounder had three interceptions and one touchdown in his rookie season.