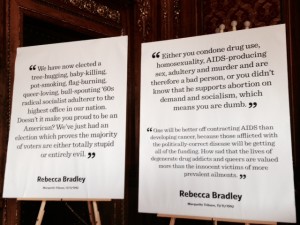 A trove of homophobic vitriol written by state Supreme Court Justice Rebecca Bradley more than twenty years ago has been unearthed by the liberal advocacy group One Wisconsin Now, and now features in the election between Bradley and Appeals Court Judge JoAnne Kloppenburg.

Scot Ross is with One Wisconsin Now, which found columns Bradley wrote for the Marquette student newspaper in the early 1990s. The then undergraduate wrote mocking and derisive comments about the AIDS epidemic and referred to voters who elected President Bill Clinton as “either stupid or evil.” Ross said Bradley never mentioned the articles in applying for the three judicial positions to which she’s been appointed.

In a statement issued by her campaign, Bradley referred to the OWN research as “a blatant mudslinging campaign to distract the people from the issues at hand.” 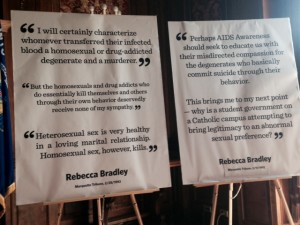 Ross, who held a press conference at the Capitol on Monday which featured placards carrying quotes from the columns Bradley wrote for the Marquette Tribune, said Bradley never mentioned the articles in applying for the three judicial positions to which she’s been appointed, although she did refer to many of her other activities at Marquette. “It is very clear she was trying to hide this,” Ross said.

Bradley was appointed to the State Supreme Court by Governor Scott Walker after the death of Justice Patrick Crooks in September, and is in a close race with Kloppenburg. Bradley is backed by conservatives, Kloppenburg is the preferred choice of liberals. The latest Marquette Law School Poll showed each candidate polling at 30 percent among likely voters, with 31 percent remaining undecided.

Ross was asked whether the revelations about Bradley might make her a more attractive candidate to conservative voters who might not be paying attention to the Supreme Court race. “That is not my concern. My concern is about what she wrote, the fact that she hid it, and the fact that she needs to resign.”

“Rebecca Bradley’s comments are as abhorrent and disturbing today as they were in 1992 as people were dying in huge numbers from AIDS,” Kloppenberg said in a statement released by her campaign. “Her career since that time includes being appointed three times to three judgeships in three years by Scott Walker who is against gay rights. Rebecca Bradley’s alliance with conservative causes and Scott Walker speaks louder than any apology she tries to make.”

A Walker spokeswoman said neither he nor his office were aware of the Marquette columns before appointing Bradley to any judicial positions.

Voters will choose between Bradley and Kloppenberg in the April 5 general election.